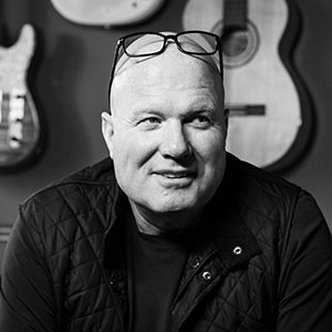 Tom has been giving brands a voice for over 20 years. As an internationally awarded Sonic Branding strategist, he's continually called upon to judge and/or preside over numerous advertising awards shows, including Cannes Lions, London International Awards, The One Show, Clio, D&AD, Creative Arts, New York Festivals, Radio Mercury and more.

Tom has worked with almost every major advertising agency and advertiser in North America, as well as many others around the world. He's a partner, CEO and driving force behind the ongoing evolution of Pirate Group Inc. Through his day-to-day leadership, mentoring and strategic development Pirate has become a dominant creative audio force in the North American market. Tom's focus and tenacious attention to detail ensures that Pirate and its growing list of clients continue to be heard.

Pirate's directors, producers, engineers and writers are all individually respected and acclaimed throughout the industry.  That said the Pirate brand is much more than just the sum of the individuals. It's the integration of years of experience, award-winning talent, state-of-the-art technology, breadth of services and excellence in customer service. Clients continue to hire Pirate for its ability to produce high quality audio-based products in an efficient and cost-effective manner.

Pirate was formed in 1990 to create and produce radio advertising.  In 1994, they added four state-of-the-art recording studios and by 1999 had expanded into all aspects of audio-post production for radio, television, feature-length films, animation and digital platforms.

Pirate further expanded its business offerings, in 2009, to include pre-cleared music licensing.  In addition toan online platform to allowing its subscribers to search for pre-cleared licensable music anywhere in the world, Hook Music negotiates music rights for the use of artist compositions in advertising.

In 2010, Pirate donated its archives to McMaster University to be used as a research and study tool.  This first tranche of work was pulled from approximately 18 years of audio production materials, spanning the years 1988 to 2005. This archive includes the audio, video and paperwork associated with some of the most important and awarded work produced in Canada and around the world. The second tranche of work was donated in 2013 and a third in November 2017.

The company has over 8,000 square feet of studio and office space: The facilities include four fully-equipped 5.1 HD digital recording studios, four music-writing rooms, a casting department and over 25 highly-qualified staff. The state-of-the-art recording studios are unique in that rather than feature buttons, knobs and meters, the emphasis is placed on comfort, visual sight lines and a view to the outside world. Each of the studios is also equipped with ISDN and Source Connect allowing Pirate to link with other studios anywhere in the world.

Comments
“One-on-one access to the Ad industry’s best creative thinkers, producers and leaders is an education you can’t buy. Sharing our real world experience will inevitably guide and shape the next generation of great creatives.”