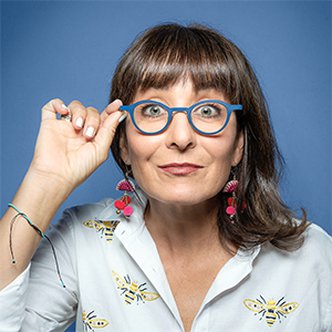 VP Creative
Lyft
San Francisco
, United States of America
A dynamo of passion and creative energy, Karin creates transformation in organizations and for her client’s businesses using her cross-cultural worldview, galvanizing teams and mentoring the next generation. In February 2021 she assumed the role of VP or Creative for Lyft, where she is responsible for expanding and amplifying the brand post IPO, by building a creative powerhouse both internally and with partner agencies.
Raised in Norway and Mexico, educated in Switzerland and the US, Karin started as the only female Art Director at Goodby Silverstein and Partners in San Francisco, where she rose through the ranks creating award-winning work on Nike Women’s, Ebay, and Hyundai, and launching the Nintedo WiiFit and Kayak.com.
A breaker of glass ceilings and advocate for women in leadership, Karin next became Executive Creative Director at WPP’S Blue Hive, responsible for all of Ford Automotive advertising across 34 European countries. With a staggering range of clients, cultures, and languages, Karin functioned as a quasi-U.N. Secretary, using creativity as the glue to achieving pan-European collaboration. As her London office expanded from 80 to 200 people, Karin helped found and build four new offices for national markets. The work these offices produced broke Ford sales records on products ranging from fuel efficient small cars to B-to-B trucks, ultimately realizing Ford’s decades-long goal of becoming the second largest brand in Europe. Blue Hive also garnered numerous creative awards, culminating in a Global Gold Effie for Media Innovation for the European Mustang launch, notable for the 27 second it took for the cars to sell out.
Karin joined FCB West in San Francisco as Chief Creative Officer in 2015 as part of a team that rebuilt and doubled that office in three years, culminating with wins at D&AD, Cannes and The One Show, capturing the top engagement score in the FCB network. Not only was it an agency resurrection, the FCB Network won Most Awarded network agency at Cannes in 2019 and at the One Show in 2020. She leads two of the top FCB global accounts from the SF office, Levi’s and Clorox. The work created under her leadership has broken record ROI and transformed legacy brands into contemporary success stories, finding relevance with younger and more diverse audiences. In January 2020, she became Co- President of the agency, in addition to CCO.
Karin regularly judges at the Cannes Lions, the One Show, NYAD, Clio’s, CA and many more. She speaks at events around the world, notably at Berkeley Haas School of Business Institute of Innovation and Entrepreneurship, the Creative Equals Conference in London, and at the US Cultural Marketing Council.