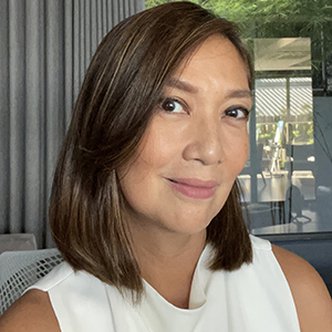 She is Chief Creative Officer of Dentsu International APAC and
"Chairmom" of Dentsu Jayme Syfu.

She is known for her work that pushes Insights and innovation. She has won major awards that include a Cannes Lion, Grand Prix for Mobile, Gold and Silver Lions for outdoor, Grand CLIO, LIA, The One Show, and D&AD pencils. Beyond awards, she has led her agency to win critical accounts:  Coca-Cola, Nestle, Shell fuels, and Dole.
A seasoned judge in awards shows, she is last year's LIA Jury President for Evolution, Cannes Lions Radio & Audio Jury President, ADC 100th Annual Awards Jury President for Interactive and AD STARS Executive Judge for Brand Experience. This year, she is D&AD Jury President for Radio and Audio, ADFEST Grand Jury President.
She is one of CNN’s Leading Women, an author/illustrator of a handbook, “Everyone Can Be Creative,” a mom to 4 creative girls, and an inspiration in breaking the glass ceiling in this mad men’s world.