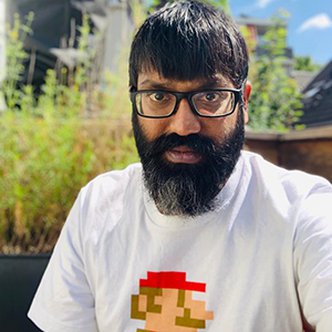 He has also worked on projects pertaining to Behaviour Change and Social impact including projects on sanitation with UNICEF and a project on AIDS awareness among transgenders with the Tamil Nadu AIDS Initiative and the Bill and Melinda Gates Foundation.

In 2013 and 2014, his work for Duracell has won back-to-back Cannes Gold Lions, as well as a Bronze Lion. He has also been awarded with a Cannes Bronze Lion for his work on DHL in 2013. Other commendable accolades won by him include an Adfest Gold Lotus, D&AD Inbooks, One Show Merits, and a Pencil from D&AD for ‘Writing in Press Advertising’.
Adweek named his campaign as one of the world’s best print campaigns of 2014, and his film for Gillette is still one of the most-watched ads on cricket on YouTube. He and his team from DDB Mudra South created the iconic Suede Gully work for Puma, which was also recognized at Cannes 2018 with 3 shortlists.
His recent work for Battlegrounds Mobile India (known as PUB-G worldwide), was awarded the Grand Prix and 3 Golds in Spikes 22.