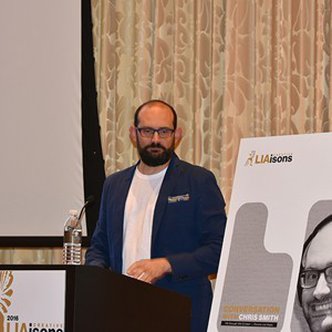 Christopher Smith, a 23-year veteran in advertising, is a writer and creative director at The Richards Group in Dallas, Texas. Since joining the agency in 1999, Chris has written for clients including Motel 6, Famous Footwear, The Home Depot, Zales, Amstel Light, Red Lobster, H-E-B, QuikTrip, Central Market, and dozens more. He’s collected shiny paperweights from the One Show, the Clios, the Effies, the Dallas Society of Visual Communications, the American Advertising Federation, the London International Awards, and the Association of Music Producers, and has won five Radio Mercury Awards, including (as creative director) the $100,000 Grand Prize. His work has been featured in Communication Arts, Print, Graphis, Advertising Age, The Wall Street Journal, and other, less reputable publications. In July of 2015, he was named to Adweekmagazine’s Creative 100: America’s Most Inventive Talent in Marketing, Media and Tech.

A frequent advertising judge, lecturer, and educator, Chris also moonlights as an improv and standup comedian, emcee, TV joke writer, and voice actor. He has co-authored three books of trivia, finished a few screenplays, and is a two-time Jeopardy! champion. He is an avid cook, voracious reader, enthusiastic but infrequent cyclist, and passionate collector (and imbiber) of single-malt scotch. A native of upstate New York and graduate of Penn State, he lives in Dallas with his wife Heather and their daughter and twin sons.