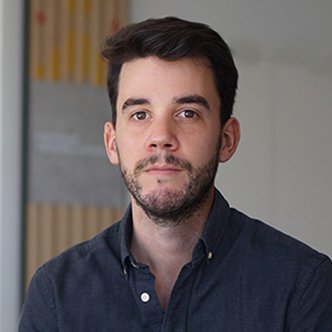 Topic: The 24-hour Ad Cycle
We live in an age where brands have to fight harder than ever for attention and ads have an ever-shortening lifespan. This talk aims at demonstrating through examples how this “24-hour Ad Cycle” gives us a "reasonable" excuse to embrace risk.

About Sébastien:
Sébastien, originally from France, is a Creative Director at DAVID Madrid.
At the beginning of 2020, he joined the newly opened DAVID European office to oversee the creative work of global accounts such as Burger King, Netflix, Mondelez, Danone, Wallbox and Twitter. He helped the agency grow from 10 to over 60 people, despite the pandemic. Since he joined the agency, DAVID Madrid became the most awarded Spanish agency and was recently named A-List International Agency of the Year.
In less than two years, he launched Milka’s new global positioning campaign: “Tender Tastes Better”, one of the most effective ads in the brand’s history. He helped Wallbox become the first EV charging company to ever run a Super Bowl ad with a campaign featuring real lightning strike survivors. His work for Money Heist converted the show’s last seasons into Netflix’s most anticipated releases. Most recently, he was behind “Meat?” and “Even More Confusing Times”, two global campaigns successfully promoting Burger King’s plant-based products.
Throughout his ten years career, Sébastien has already worked in 2 continents and 4 countries (Peru, France, Italy, and Spain). Prior to DAVID, he worked at Publicis Italy and Publicis Conseil where his campaigns for global brands such as Heineken, Leroy Merlin, Renault and Diesel helped both agencies make it to the top 10 most creative agencies at Cannes Lions.
His work has been featured in important publications such as TIME Magazine, the New York Times, The Guardian, Forbes, The Independent, Vogue, Esquire, among others. He has been awarded more than 100 times in festivals like Cannes Lions, LIA, D&AD, One Show, ANDY, Eurobest, etc., winning golds and Grand Prix in almost every award show. In 2021, Cannes Lions awarded his work with a coveted Grand Prix and Titanium Lion and named him sixth best copywriter in the world.