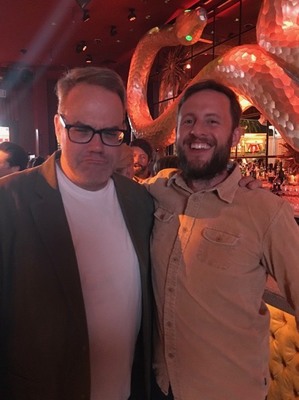 Copywriter James Sexton (right) represented BMF at the 2017 LIA Creative LIAisons program in Las Vegas, as all the big names in the industry from advertising to design to digital to production and technology gathered together. Here Sexton shares his experience exclusive to CB.

Up until a month ago - like a lot of others I've spoken to - I was oblivious to the LIAsions course.

So a quick run down. It happens in parallel to the LIA awards judging and uses the ECDs and CCOs there judging, to teach a handful of creatives from around the world a thing or two about making great work and getting ahead in the industry. That's no easy task; especially when they're away from home, in amongst the bright lights and distractions of Sin City (Vegas).

There are talks, dinners and events as well as a chance to witness first hand the judging process.

Those who know me, or have had the misfortune of being stuck talking to me at an industry event, can attest to just how socially awkward I am. So the thought of mingling with hundreds of creatives I don't know, and in particular those in the upper echelons of our industry, had me bricking it. But everyone was lovely and a few people even let me hang out with them regardless of my social inadequacies.

Anyway, here are my top takeaways from what was a really awesome event.

#1 The tacos are just better in the US

#3 Yet another mass shooting, isn't enough to change US gun laws

#5 If the sight of your brand turns people off, try 'creative unbranding' - use mystery to seduce your consumers (Pum Lefebure - Design Army)

#7 Judges are very aware that their choices send a message to the industry, and have an impact on future work

#9 Treat the client, agency relationship more like improv than stand up - people are more invested if they are involved in the development (Chris Smith - The Richards Group)

#10 'Big Data' is all the rage - but like David Ogilvy said "We all have a tendency to use research as a drunkard uses a lamppost - for support, but not for illumination"

#14 A comic book artist/writer, Jack Kirby is an inspiration to everyone trying to make great work in tough situations

#19 Six days in Vegas is tough on your body

I've never done anything like this before (and I'm sure that after I file my expenses I won't get another chance), so I don't have much to judge it against, but I would say LIAisions is a must-do for all creatives and I want to say thank you to Barbara and the team for having me.

Here's some of the work that I saw and loved on my trip (maybe you've seen it, I hadn't)...