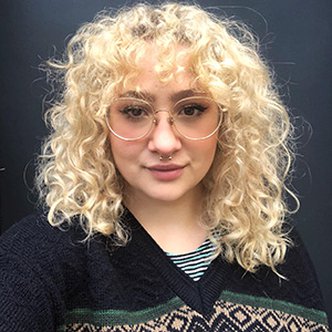 It was a hugely valuable experience.

The first thing we got told at Creative LIAisons by Barbara Levy was to get rid of anything we thought we knew about advertising. Following this advice, Lauren and I decided to swap roles for this diary and share our experience through art and copy in a new way: worse. Please enjoy our account of Day 1 with an attempt at words by me and beautiful illustrations by Lauren. Thanks Barbara.

Two of the three talks today were focused around sound and sonic branding (by Ralph van Dijk and Diedrick van Middelkoop). These are words we felt like we hear thrown around a lot, so it was interesting to get the lowdown. It never occurred to us that Audio Directing is a job that exists – although now it seems obvious. Going forward, we want to involve more thinking around this in our work – if Lauren doesn’t run away to become an Audio Director first.

We also witnessed the definition of creative chemistry between Diane Jackson and Oliver Fuselier, which was appropriate since their whole conversation was about “collaboration in pursuit of magic”. They stopped using the word “partnership” to replace it with a much more active, involved one: “collaboration”. If there was one thing I took away from today it was this attitude – I love the idea of creative people working together without barriers of perceived roles (Lauren – can you please insert joke here about who’s the better writer).

Day 2: Dear Diary, We’re exhausted. Day 2 was a heckers back-to-back onslaught of information & we’re terrified it will all fall out of our brains since it’s fired at us so quickly. Today’s episode is brought to you by the number 8 – the hour that we will be in bed by tonight.

In the morning Pum Lefebure’s presentation was filled with fearless colour, attitude, and meticulous attention to detail. There was an audible clatter when every jaw in the room fell to the floor. Our inadequate summary consists of a few memorable quotes; we particularly liked her phrase “visually vigilant”, which means always being aware of the things you see around you. She said every creative, not just designers and art directors, should be fluent in visual language.

We were relentlessly hit with wise words throughout the day, from the gravitas of Piyush Pandey to the fast-paced world of the Branded Entertainment panel. Both talked in contrasting (but complimentary) ways about how to communicate with empathy with your client and other creatives.

Interestingly this topic came up again with Emad Tahtouh when he was discussing what happens when we combine emotion and tech. It sounds like storytelling will always be a part of what we do in the industry.

We then got an engaging crash course on presenting from Matt McDonald; from not having Coke at a Pepsi preso to the nuances of pitch theatre, “don’t try to solve the problem in the room” is probably the best advice of the day. It was a massive relief to see something we get could put to use immediately when we get back to work – in amongst all the case studies of Beautifully Crafted Multi-Million Dollar Ads with clients who would catch you in a trust fall…

Throughout the day, everyone kept talking about always learning, always being awake, and responsible for your self investment. That is, being proactive in furthering your skills. It was inspiring to hear this, especially since so many things went over our heads sometimes. We have a lot of self investment to do.

Day 3: Where to start? LIA 2019 has been permeated with this magical word: “empathy”. Empathy with our clients, with our consumers, and with each other.

A woman came and asked us (nerds in the front row) if the seat next to us was taken. We talked about where we were from, where she was from… she told us a story of the cockroaches in her apartment when she lived in Sydney years ago. In fact, she admitted that she had a cockroach story from every place she’d lived, even Afghanistan. And then she picked up a mic and was introduced as Lara Logan, multi-award winning journalist. Okay. Her poignant talk put our jobs into some much-needed perspective and is probably one of the main reasons we’re writing about today in so much detail.

The RARE masterclass felt like the answer to a lot of the questions we had been asking ourselves, not just today, but throughout our short careers. It was an enlightening and empowering session on unconscious bias, what we stand for, and how we can embrace everyone’s differences to better the creative work, each other and ourselves. We did a few exercises with David Slocum about negotiation and our personal values. For one, we had to go through a list of about 100 adjectives and decide on the 5 values that we believe in the most. To end this article on a slightly lighter note, we found that ours were pretty similar (makes sense). Here they are:

Day 4: Dear diary, Today was what we all came here for. A pool party.

And to watch some of the best campaigns of 2019 get torn a new one. Today was judgement day.

I chose to sit in the Production and Post-production jury room today, because I believe in the importance of craft. The parts I was looking forward to most were the animation and music video categories (for anyone who knows me, this is not surprising in the slightest). It was really interesting to hear the jurors’ conversation about style. Again, an animation or music video could have been executed flawlessly – but was it something we haven’t seen before? Is it something fresh? Has it been seen in this context before? Does it go beyond just serving the story? These questions ultimately decided the prizes awarded.

One of the overall takeaways for me today was that creativity doesn’t stop at the idea, or even just the treatment. Every single detail along the way should be decided with this in mind. There was a lot of debate in the room about solutions that work and serve the ad, but lack any additional creative perspective.

There were also some interesting debates about the role of skill and the difficulty of certain executions. Diane Jackson told the room a great metaphor relating to this: a jazz saxophonist could be (very impressively) circular breathing throughout a whole song, but if it doesn’t sound good, it doesn’t matter how technically adept the musician is. Ultimately they judged on the end product rather than the process, which is an approach we agree with, and one Lauren’s room also touched on.

She sat in on the New and Social Influencer categories, which were really interesting but also really hard to define. How do you define what makes something ‘new’? And what counts as an influencer these days?

We were lucky enough to be able to speak up when we felt we needed to. And lucky we did. One particular LIAson’s articulate observations proved the importance of (and obvious lack of) diversity and inclusion in award judging rooms, especially when it comes to people with disabilities. Of course, this is really just a reflection on the industry and society as a whole, but it was amazing to see up close.

After today, we have a new respect for award jurors. It’s a job that requires a lot of endurance; we were only with them for about 7 hours or so, but this was the fourth day that they had sat down to deliberate. There were 19 hours of production entries sent in to LIA this year. Woof.

Tonight’s the big pool party. And apparently if you’re not schmoozing, you’re losing.

Since our wild week is wrapping up, and our brains are full from learning (pretty sure we know everything now), we’re un-swapping roles. Bring back the alliteration baby, Aïcha’s the art director again.

Creative LIAisons was rounded off in true Yankee style, with an entrepreneurial workshop feat. Daymond John from Shark Tank. So I guess that makes us entrepreneurs now, kinda like Lindsay Lohan.

So what exactly did we learn here? Oodles. But here are our top 5 takeaways:

1. Although we’re still learning, our point of view is just as relevant as those who’ve been in the game forever. And we shouldn’t be shy about sharing it.

2. We learnt how to get what you want at work, and how not to piss off everyone while you’re doing it.

3. You can ask anyone you want to be your mentor. If they’re worth learning from, they’ll want to help.

4. Brands have more power than governments.

5. Don’t pay to go to Europe when you can do shots on the sunny Venetian canals at midnight.

The highlight? Making friends from all over the world. And some of them weren’t even Australian! Thanks to LIA, we’ve got couches to crash on in Chicago, New York, Toronto, Paris, Berlin & Amsterdam.

Before we sign off, we want to thank Adrian and Sarah and everyone at MADC for giving us that ridiculously oversized boarding pass. It’s been an invaluable experience and we won’t forget it. Plus a massive thanks to Barbara from LIA for putting on the show.

Sure there were some weird moments this week, but it’s Vegas. Everyone wins here, right? Well ok, maybe some people will walk away losers. But don’t despair if that’s you. After all, every time you lose something, you learn something. Signing off for the last time, L&A @ LIA

https://campaignbrief.com/madc-lia-pitch-a-ride-to-vegas-winners-aicha-wijland-and-lauren-eddy-from-che-proximity-melbourne-discuss-creative-liaisons-program/
Before Creative LIAisons:
1.    Prior to being chosen to participate in this program, what did you know or hear about the LIA Creative LIAisons program?
I didn’t know anything about it. I only found out about it when it was announced in Campaign Brief that LIA was looking for entries for this competition.
2.    How did you feel when you were chosen to participate in Creative LIAisons, an exclusive program of 100 attendees aged 21 – 30 from around the world?
I was ecstatic, because I’ve never had an opportunity like this to interact and learn directly from so many global legends in the industry, as well as other young creatives like us.
3.     If you were to choose what the speakers present, what topics would you choose?
I’d be really interested to learn about the way the speakers deal with the pressure we all put on ourselves when it comes to making great work. I’d also be interested to see what the speakers would say about the responsibility we have in influencing culture, and how exciting it is to be making impactful work.
4.    If you could choose any juror to interview for two minutes, who would it be and why?
I’d love to chat to Jonathan Westley from The Mill, since their work is so high quality and diverse. They’re behind some of the coolest work that’s being made today & I’d love to get his insights on craft. I would love to know what kind of briefs excite him.