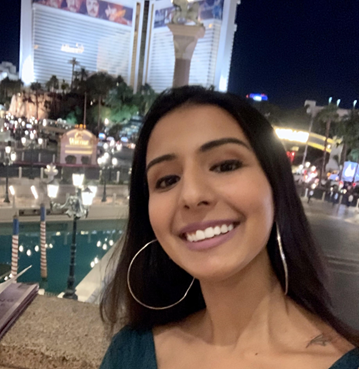 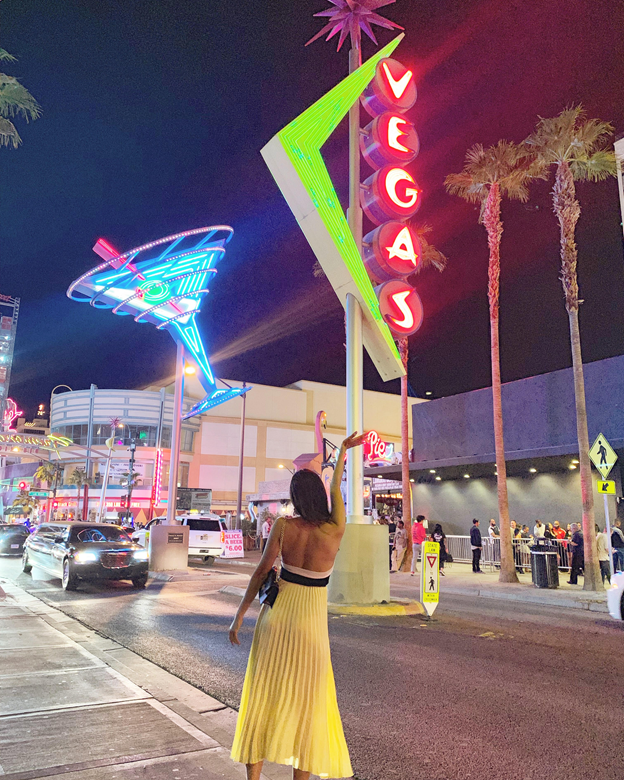 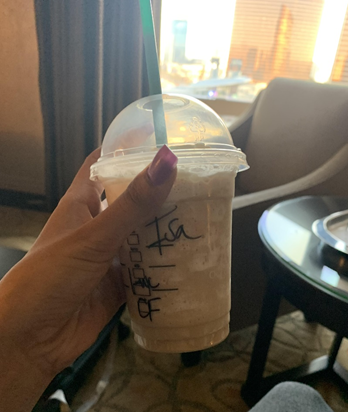 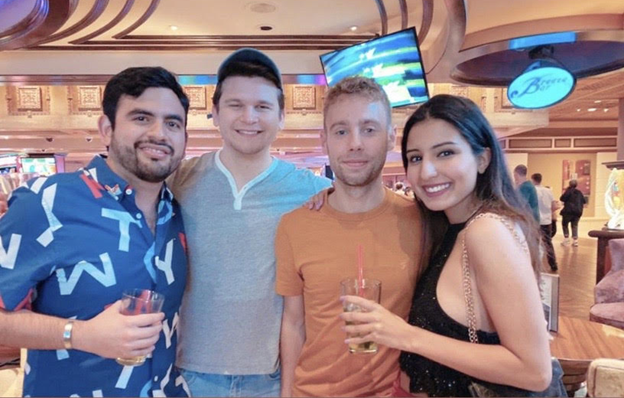 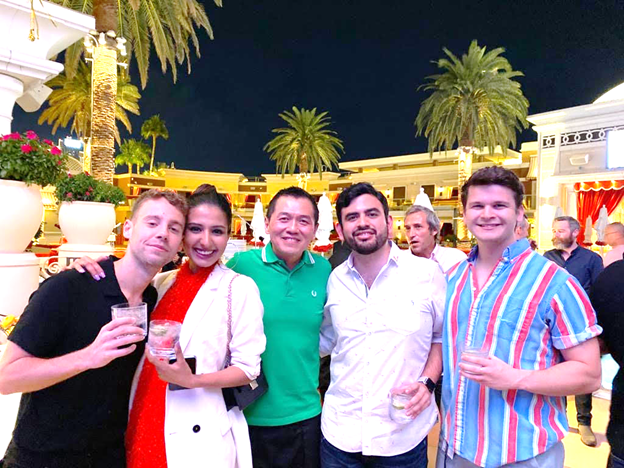 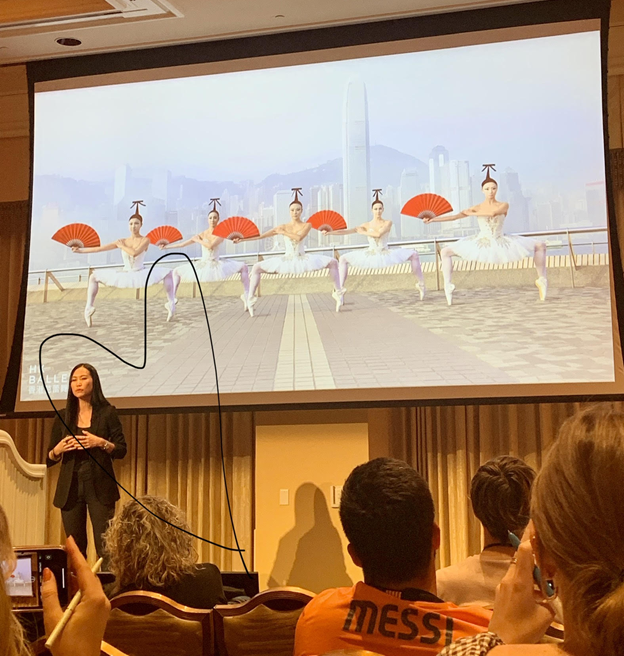 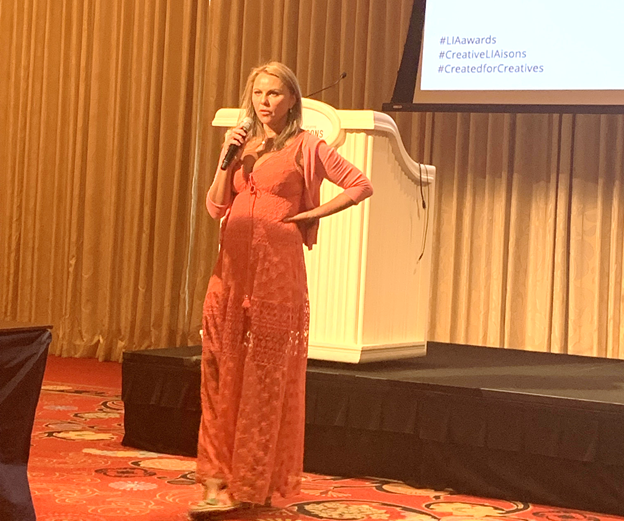 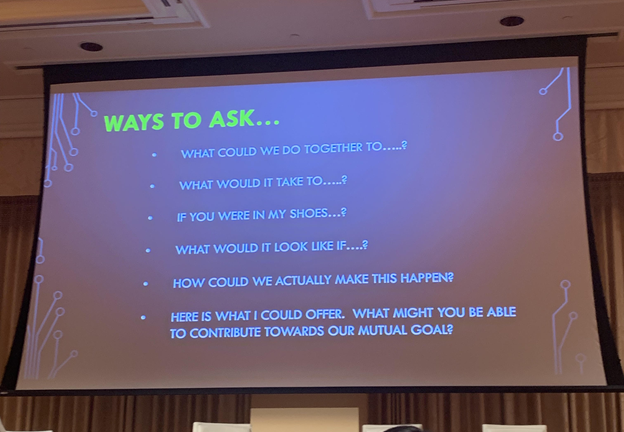 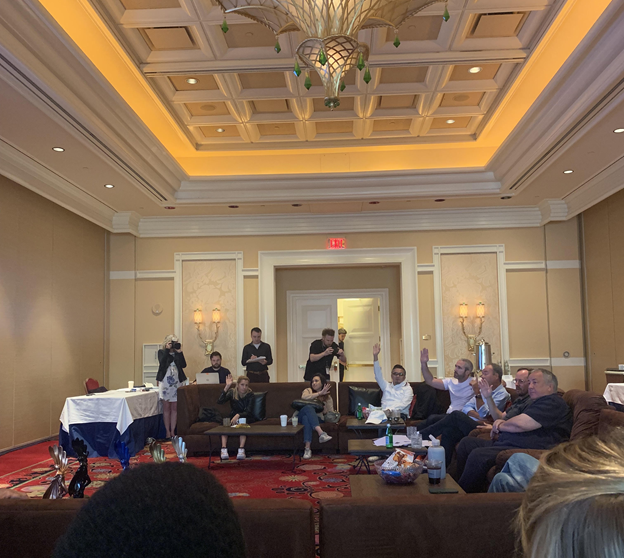 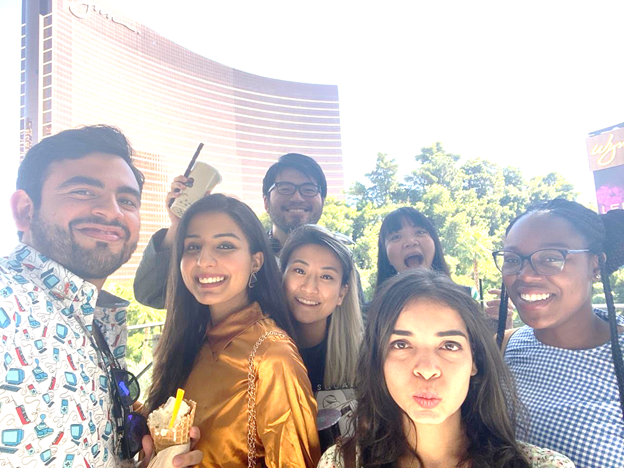 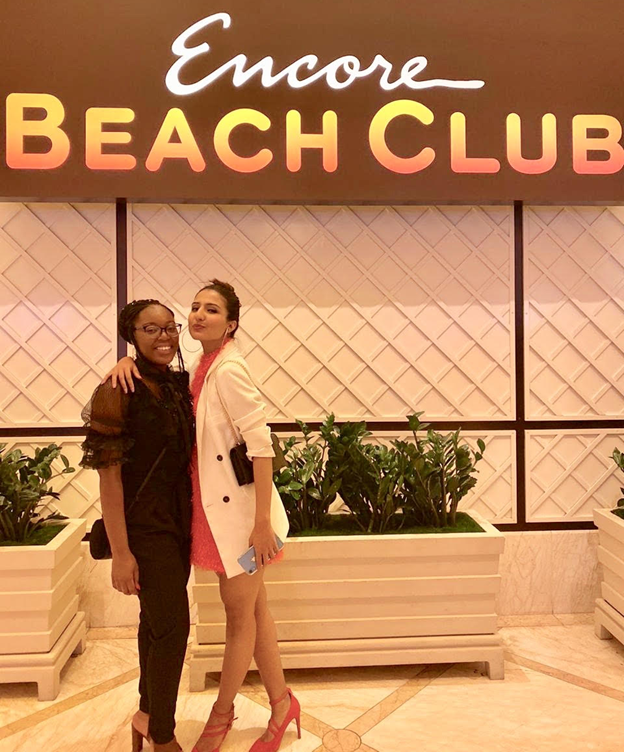 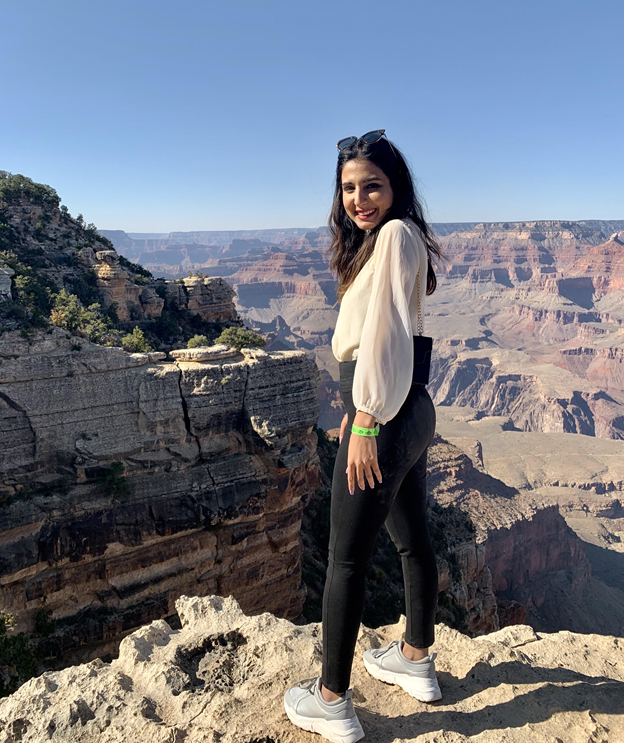 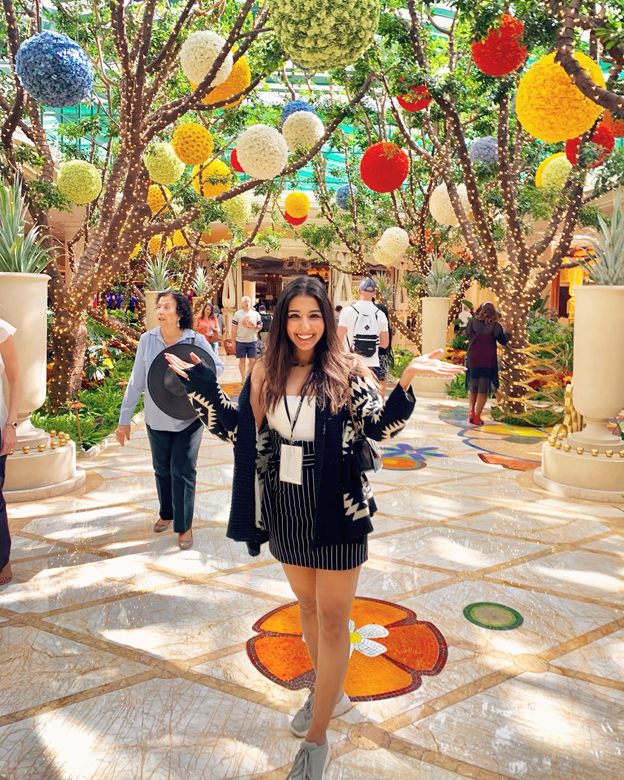 They say do not have breakfast lunch and dinner with your idols. They couldn’t have been more wrong, courtesy: LIA. I reached Vegas a night before the 5-day life-changing program was scheduled to start. Jetlagged and exhausted with the 22-hour journey, changed into my joggers and hit the strip. It couldn’t have been brighter even if it wanted to. God-size ads, passers walking by with the drink in their hands, robots performing on the street-side and a beautiful sight of Gordon Ramsay’s ‘Hell’s Kitchen’, which hopefully has ‘Idiot sandwich’ on the menu! Spotting a lot of bookmarks that were the must-have — in&out heavenly burgers, slurpppp check!!! Strolled in the venetian, watched a rap battle, paid homage to McDonald's, and headed back after midnight. Just sweet 10 km, that’s it.

Come next morning and I am a sucker for exploring places in the wee hours and gorge on beautiful breakfasts. #Dissapointmenthonks, there are no postcard-ish breakfast places in the sin city. All in there are hotels. So, my café-hunting soul took a sigh and entered a Starbucks, ordered a croissant and Frappe. Little did I know on the first day, that that is going to be my holy breakfast for all days to come. We got a memo that LIA venue (Encore) is a breezy 10 minutes’ walk from     the place where we were staying (Treasure Island). Well, Vegas is just a giant version of a car’s side mirror because objects appear closer than they are! After walking for way past than 10 minutes and asking directions on the way, I did accidently bump into many LIA participants even before hitting the event (120 people from across the globe headed in the same direction at the same time, of course!)

Cut to Encore! Bustling with the young creatives from everywhere you can imagine, almost a creative Disneyland. Introductions ensued quickly, and what followed was spotting each other in the crowd and finally meeting my colleagues from across the globe with whom I had only e-met. So, I spotted Omar from isobar Mexico and we together hounded Jack from isobar London and Jerry from isobar Chicago was to be found later. Also had an opportunity to trick a pizza treat from Ronald, Global CCO Isobar, with whom I worked on a project but haven’t had the chance to meet yet.

The event began with Barbara Levy welcoming us and giving advices on how to get free drinks by lurking on the casino bars (didn’t work) and straight-up asking people to get you drunk (worked!).

What followed was a trail of extraordinary sessions by the industry leaders over the next 5 days that gave us a real high.

For me one of the best things about LIA — it would be accessibility. Ditching the grand stages which inherently reinforces the distance between the one on the pedestal and the one viewing, LIA opted for a low ground podium. I don’t know if it was intentional, but I loved it. Some speakers, Lara Logan for example, even let go of that and addressed us while being amidst us. The speakers were available throughout the day for a chat and even at the after-party. The creative world needs that. A creative life can be grilling, exhausting and sometimes cruel. And learning from the ones who made mistakes, lorded fear with confidence and who knew that the extra mile taken makes an epic journey, reinforces the faith in the ‘why’ of the ‘what’ we do.

Everyday for 5 days, from morning 10 AM to 6 PM we were marinated in ideas and life changing interactions. And at the end of each day, we couldn’t wait for one thing — take a nap! The irony of a bunch of young kids, in the prime of their lives, free in the sin city, unable to think of anything but taking a nap, can’t be missed. (“Do you want to?” “Yes, I do.” “Me too.” “Oh! Can’t wait.”) In our defense, the sessions were intense!

Whether it was Lara Logan (I am such a sucker for powerful women) who tells us how dare we think we are entitled a job after college, how dare we think anyone owes us anything! Watching her narrate her life in one hour was an absolute thrilling experience. She has been a trailblazer in investigative journalism, and from recalling an incident in war where she was bombed and covered in dust and she could hear people talking about her like she was dead, she had one powerful lesson — get up your ass and make a difference. Her only regret — not being able to interview Bin Laden!

Or the thought-provoking session by the Innervation Lab with Daymond John and the Shark group. 4 magical words — “What will it take?” — ask questions , make opportunities and take the world head-on with these 4 powerful words, so much so that an LIA participant got associated with the Daymond John’s work towards autism by asking a simple question “What will it take for me to get associated with your work?”. Over many practical sessions like how great ideas fail because of not being presented well by Matt McDonalds and negotiation training by RARE google, Disneyland had much more than just fun props.

My absolute favorite were the statue discussions where we could be in the same room as the jury and observe them while they decide. I was in the Mark Tutssel’s group, who was leading the non-traditional jury. The entire day, seeing the agreements, disagreements and debates between judges gave unbeatable insights on what works in an idea and how a simple input or doubt from one of the judges can change the game. And a later one-on-one discussion with Mark Tutssel on his life, creativity without borders, on his journey was, I would say, kinda cute!

It was impossible not to be impressed with not just the speakers but the participants! 120 people of different nationalities, different creative process and — a gold mine for any creative. We all came in solo, mostly, and I went back with friends. Su, whom we designated as the weird tea lady with her obsessions with all things tea, Yolanda who sometimes scribbles on her hand making it look like a tattoo and whose work in experiential design was fascinating, it was a fun bunch who danced to Drake and Rihanna all night, and lost to a cab driver in the iPhone versus Samsung debate (he totally busted us by charging our iPhones with his Samsung!)

As LIA came to an end but my journey did not, I visited the majestic Grand Canyon for a day. The stories of the bus driver on how the Canyon is one of the world’s most chosen place for suicide and murder point, kept us spookily entertained (marking Canyon as the next Halloween costume!). There are no words to describe what felt like in front of the Grand Canyon, some things are left only to experience. Slipping off edges asking strangers to lend a hand and click pictures is a struggle sob story we will keep for another day. The last day was for shopping gifts till my knees and wallet gave up, visiting the Erotic art Museum, which is brilliant and a must-visit and witnessing the breathtaking O Show by Cirque Du Soleil at Bellagio.
I could go on and on, but a copywriter needs to mind the word limit, right?

LIA, you were one hell of a colorful global cocktail. The hangover would last for years!