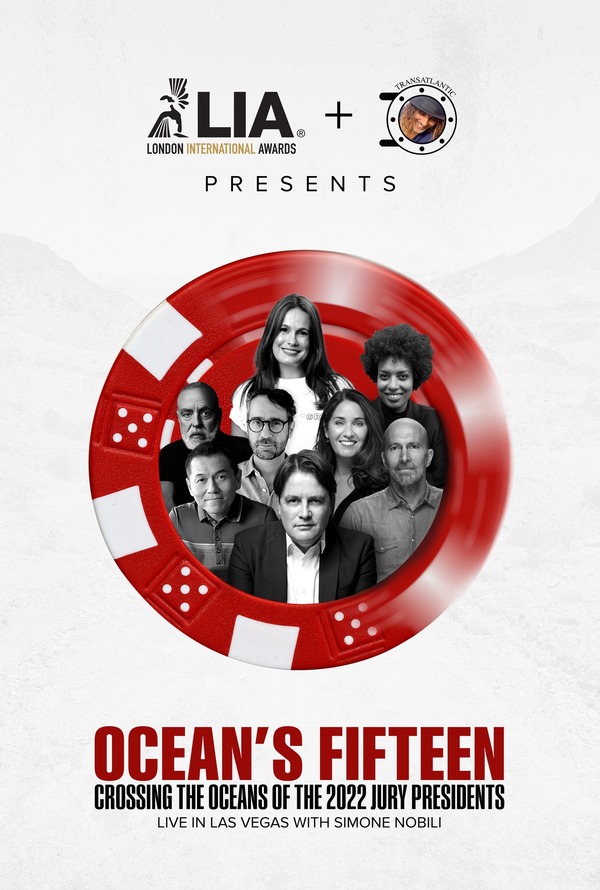 TRANSATLANTIC goes to Vegas and becomes OCEAN 15.
LIA in partnership with Transatlantic is bringing you an exciting new podcast hosted by Simone Nobili being filmed live in Las Vegas during LIA Judging, featuring London International Awards (LIA) Jury Presidents.
Transatlantic, the video podcast with a lot of water in it, created and hosted by Simone Nobili (Global Group Creative Director at Wunderman Thompson NY) is landing in Vegas for the 2022 London International Awards (LIA) Awards festival.
Simone crossed some of the biggest oceans in the industry in 2021 (View here), but he’s now ready to cross the waters of the Jury Presidents of the LIA Award show.
This “special edition” of Transatlantic - renamed OCEAN’S 15 in honor of the 2007 American film directed by Steven Soderbergh that was set in Vegas - will be broadcast live at Encore hotel, from September 30th to October 5th, running concurrently with LIA judging in Las Vegas.
In a room where red will be the dominant color and casino chips will be scattered across a coffee table, Simone will use “The 7 Seas Interview” format to dive deep into the lives and work of his guests, bringing to the surface undiscovered stories.
Follow LIA @lia_awards and Simone @Nembutal_ for sneak peeks and live updates on ‘Ocean’s 15’.