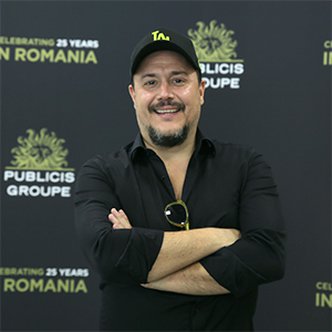 Jörg Riommi is an Italo/German creative leader based in Bucharest, Romania.

As Chief Creative Officer of Publicis Groupe Central and Eastern Europe (CEE), he oversees the creative output of the Groupe’s creative brand agencies across 15 markets. He is also the Chief Creative Officer of Publicis Groupe Romania and a member of Publicis, Leo Burnett and Saatchi & Saatchi Global Product Committee (GPC).
Prior to his current role, he has been part of Saatchi & Saatchi in Rome, S. Juan Puerto Rico, Bucharest, Frankfurt and Berlin, and a joint creative for several network projects in Madrid, Amsterdam, Paris, Copenhagen, Geneve, Brussels, Milan, New York amongst others.
He has also been part of several international juries including Cannes Lions 2017, Dubai Lynx 2018, London International Awards 2019, One Show 2020, D&AD 2021, Immortal Awards 2021 and was the regional Chair for Europe at the Andy’s 2022.
Jorg's work gained more than 300 awards including multiple Grand Prixs and Golds at all the major advertising festivals such as LIA, D&AD, Cannes Lions, One Show, Clio, Eurobest, Golden Drum, ADC. He’s particularly proud of his D&AD Black Pencil.

In recent years, he was part of the team behind Burger King’s iconic Moldy Whopper global campaign that has been ranked #1 most awarded advertising campaign in the world by the WARC ranking 2021.
Under his leadership, Publicis Groupe Central & Eastern Europe’s creativity was widely recognized at leading global, regional, and local creative and effectiveness competitions including Cannes Lions, The Drum Ranking, Golden Drum Festival (Network of the Year 2021), and Effies Euro. Locally, Publicis Groupe agencies are also ranked #1 in Creativity across Romania, Russia, Serbia, Latvia and Ukraine.
He was ranked #7 most awarded Chief Creative Officer in the world by The Drum ranking in both 2021 and 2022, and the Creative Director of the Year at Golden Drum Festival 2021.