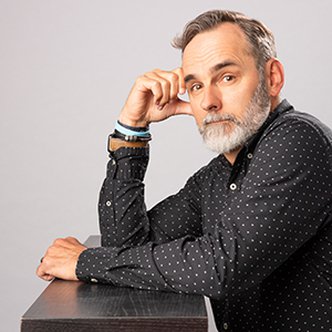 EVP, Chief Creative Officer
MRM
Detroit
, United States of America
MRM Detroit Chief Creative Officer Jeff Cruz is more than just an award-winning leader. He’s a creative powerhouse who’s captured the highly coveted Grand Effie, a philanthropist who has lent his talents to worthy causes, and the embodiment of Detroit creativity, heart and hustle.
Over a career spanning more than two decades, Jeff has created and led campaigns for global brands including General Motors, Harley-Davidson, Cleveland Clinic and Coca-Cola. Since joining MRM in 2016, he has worked to elevate the agency’s creative, enrich the agency’s culture and grow the agency’s business, and was named IPG’s Global Diversity + Inclusion Ally of the Year in 2018.
Jeff also helped create the G Show in 2009, the unofficial afterparty for the D Show, a Detroit advertising awards event, which has raised thousands of dollars for the memorial scholarship for his mentor, George Katsarelas. An expert in shaping brands and customer experiences that captivate people, Jeff believes that ideas power everything — and that when you truly put the focus on people, amazing things will happen.

Comments
To be honest, I went into the whole LIAisons experience with rather high expectations. Sure, I appreciate the opportunity to be able to share some of my experiences and expertise, but I was also looking forward to hearing from - and being inspired by - the next generation of creatives. And let me tell you, the dynamic duo of Isabel Harvey (Copywriter, BBDO Dublin) and Ivona Poljak (Art Director, BBDO Dublin), Liam Ratliff (Copywriter, Ogilvy, Melbourne) and Ronak Ramraje (Group Head Art at DDB Mudra group) certainly did not disappoint. Each and every one of them made me even more excited about the future of our business. To a person, they were each their own version of immensely talented, infectiously charming, curious, insightful, and just plain amazing to chat with over the course of our series of great conversations. I truly enjoyed their thoughtful questions, their frank and honest answers to my questions, and sometimes even the nuggets of ideas they shared with me. I looked forward to each session and always left with my brain racing (in good ways) and my soul refueled. I’m grateful I got the chance to connect with these fine folks and the entire LIAisons experience.